What is Proton Swap?

One of the best features of Proton blockchain is the ability to Swap tokens directly on-chain by utilizing smart contracts. Proton Swap is a DEX (Decentralized Exchange) that exclusively swaps xTokens instantly at super low fees. Cryptocurrencies that are deposited into Webauth.com wallet are wrapped and converted into xTokens (BTC to XBTC, MTL to XMT... you get the idea). Once the cryptocurrencies are wrapped into xTokens, they can be swapped for other xTokens on Proton Swap.

Audited by PeckShield, an industry-leading blockchain security company, Proton Swap was found to be a secure and reliable decentralized exchange. We know that your cryptocurrency is valuable to you, which is why we’ve taken extra care to make Proton Swap an easy, safe, and valuable tool for your journey through DeFi.

All swaps on Proton Swap are done without the need to deposit your cryptocurrency in a centralized exchange. By interacting directly with your wallet, swapped crypto will be withdrawn and deposited directly, ensuring you maintain complete control over your cryptocurrency at all times.

Unlike other swapping tools currently in the wild, Proton Swap stands out by offering record-breaking fast swaps and industry-low fees. Swaps between Proton-wrapped assets happen instantaneously, and any fees charged are negligible at most. That means no hours-long transaction times, no eye-watering gas fees, and no reason to regret a swap.

What is a wrapped asset or token?

What is the advantage of a Proton-wrapped token?

When a token becomes wrapped and converted to the Proton blockchain, it enjoys every benefit that native Proton tokens enjoy. That means instant transaction times, no gas fees, and so much more. For example, while it’s impossible to send one satoshi of regular BTC due to the gas fees associated with that blockchain, one satoshi of XBTC can easily be sent to other wallets. This same logic applies to other Proton-wrapped tokens as well.

Difference between the Market Price and additional estimated spread (cost) due to total value of the transaction. Larger transactions will have a higher Price Impact simply due to utilizing more Liquidity (see below). As a result, Price Impact and Liquidity are inversely correlated. In general, higher Liquidity will result in a lower-Price Impact. The final price already includes Price Impact in the final calculation.

⚠️ Always review the Price Impact amount. Certain xTokens with shallow liquidity may produce an unfavorable swap ratio. Since all swaps are final, it is critical that Price Impact is reviewed prior to executing a swap.

The absolute minimum swap amount you will receive during this transaction. Once the swap is executed, If the amount received is less than the Minimum Received amount displayed, the transaction will fail. This is a safety net that prevents unexpected and unfavorable swaps due to volatility.

The amount of xTokens available in the AMM Pool for the selected Swap Pair. A higher liquidity figure means the total value of the transaction can be larger and have a minimal Price Impact. 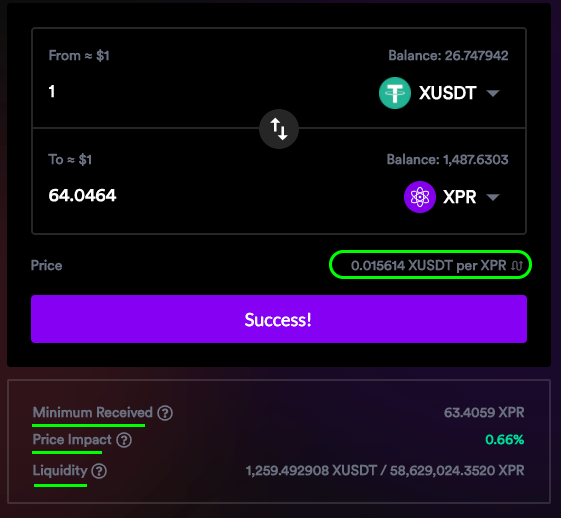